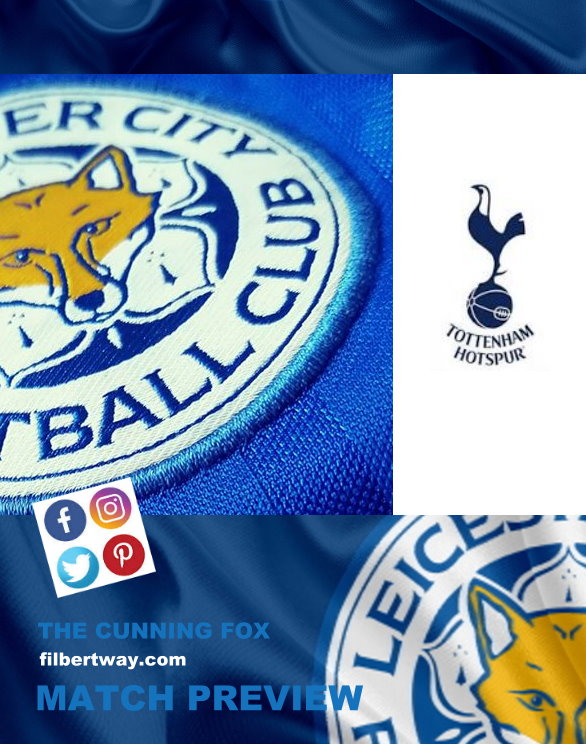 We are going into the final of the Premier League season and we are now introducing our new match preview section starting with todays game v. Tottenham Hotspur. Of course we would like Leicester City to win, but when we all are looking back on the 2019/20 season it will be one of the best ever as a fan of this club.

Tottenham Hotspur, last years Champions League finalist will this season finish below Leicester City in the table which is a big surprise. The fact that Jose Mourinho is the man in charge of Spurs at the moment would also have taken the odds to heaven when you look at how fantastically well Mauricio Pochettino had done in the past seasons.

Despite Leicester City being the team highest in the table TCF still believe that Spurs are clear favorites based on the fact that they are at home and that they have a certain Harry Kane in their line-up.

They are also having a bit of a top form lately only defeated once after the restart away to Sheffield United, winning four and one single draw in those Premier League games. They also look strong, especially up front with of course not only Harry Kane being on form but also seeing Heung-Min Son taking huge responsibility.

We do concentrate on Leicester City and predict that Brendan Rodgers will play almost the same team as against Sheffield United, keeping Kasper Schmeichel in goal and also give new starts to Luke Thomas and Wes Morgan who will be the captain.

Brendan Rodgers said in his pre-match talk that he would bring the same squad and that would also see the same team entered, but with one single doubt, Demarai Gray could be in the starting line-up instead of Harvey Barnes, that might be the only doubt, or if Brendan decides to go a bit defensive and play either Hamza Choudhury or Nampalys Mendy alongside Wilfred Ndidi in his new composed 3-4-3 system.

It’s no reason to go for a draw since that will not settle anything regarding Chelsea and Manchester United and to play without the experience of Bennett, Morgan and Evans would be risky.

A game in 1973 is also one to recognize as Leicester City defeated Tottenham Hotspur 3-1 in a league game that was “telly-live” in Norway with a certain Steve Earle making his debut and having fond memories of all those great heroes, Len Glover, Steve Whitworth, Frank Worthington, Keith Weller and Peter Shilton who all were on show that evening, what a great game, Leicester winning 3-0.

There are of course many “great moments” and “happenings” over the years and looking back in the “short-mirror” we last played Spurs at “Filbert Way” in September winning 2-1, goals from Ricardo Pereira and James Maddison, but we also remember “the horror” of that 1-6 happening in May 2017 and of course that 5-4 defeat at Wembley a year after.

In our 3 v 3 we are looking at the following specials,

Who would you have in charge. A difficult question as Jose has so many great results achieved in the past, and also doing ok at Spurs at the moment, but Brendan Rodgers is a manager to like as well managing Leicester City at the moment, but in a way believe that seeing Jose in charge of Leicester could be almost as having Claudio Ranieri, he would have done a magnificant job,

Both players have represented Leicester City and Tottenham Hotspur and they are England heroes in different decades. But in a way believing Harry might be a more complete forward, but a very difficult one. Harry has 32 goals in 45 internationals, and has scored 140 in 205 for Spurs, he also scored 2 in 11 for Leicester City being placed mostly out of position during his time. Sorry Gary, but Harry is the one.

We would like to say King Power Stadium, but it’s not very difficult to see a reason why we should rather see Leicester City in a bigger stadium, giving more people a chance to attend games and hopefully get a new stand that can give place to more spectators and grow the amount of regular season ticket holders. A clear winner this one,

Tottenham winnig the 3 v 3, 3-0 might not see them as winners for this clash, but we are uncertain about Leicester City in this game, especailly with Jose Mourinho in charge of Tottenham and also with a Harry Kane in form, it will be a very difficult game, to predict a defeat is nothing we like to do, so we are hopefull and dreaming of a 1-1, hopefully a new goal for Jamie Vardy, but it might be one of the most difficult games of the season.