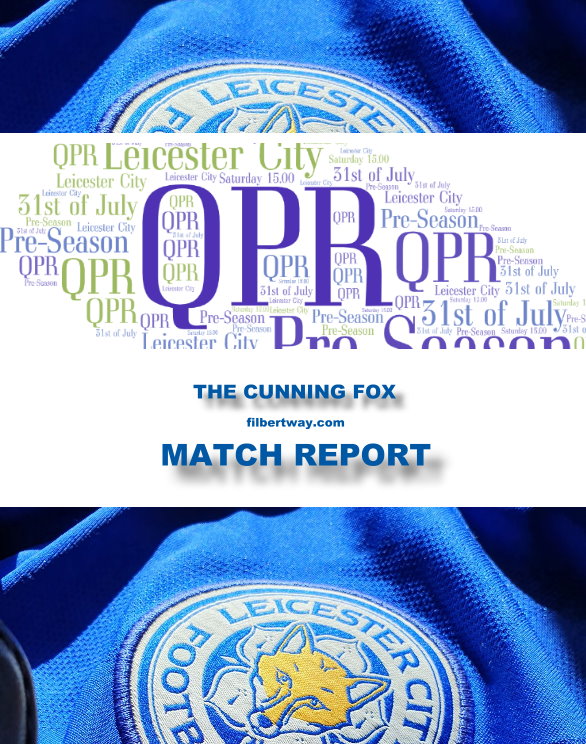 Brendan Rodgers fielded probably what he believed was his strongest eleven from start, with a come back from Harvey Barnes as a happy point, but with QPR further in their pre-season and sending out their strongest team this became a really difficult game for Leicester.

The game showed a quality gap between QPR and Leicester, with the Championship side looking sharp and ready to go and Leicester a bit on the chase for answers, but again hopefully just a part of the way forward to full fitness when that game v. Wolves comes along in the PL kick off.

Leicester had their chances and with James Maddison absent and not in the squad, Bouba Soumare showed his best in the three men midfield alongside Wilfred Ndidi and Youri Tielemans, and a number of nice passes to Jamie Vardy could have seen Leicester go in front early on, but it was not to happen, with the touches not yet totally in there.

The game was an equal affair looking at possession, but QPR slightly sharper and in the 45th minute, Charlie Austin made his strike and scored, 1-0.

Leicester did one change at half time swopping Marc Albrighton with Harvey Barnes and it really didn’t make much difference with QPR keeping their best eleven on the pitch and after 55 minutes it was time of a new goal as QPR scored again, they were 2-0 up and it looked brightly for the Londoners who have impressed in their pre-season friendlies.

Leicester made a grand number of changes just minutes after, bringing on Amartey, Thomas, Benkovic, Nelson, Daka, Dewsbury-Hall, Choudhury, Iheanacho and Sowah coming on, and it paid of with a strike from Dewsbury Hall after 77 minutes.

Leicester have more depth in their squad and could bring on a number of quality players as QPR also made their changes getting weaker as they might need to keep a first eleven as tight as they can and with that in mind, gaps were opened and Patson Daka first got his goal after being played through by Marc Albrighton.

We all thought it was Leicester who would come out on top and score a late winner, but instead QPR made a counter attack and scored from close range. again a set back for Leicester as they did see themselves 2-3 down after 82 minutes. QPR also had a shot earlier on in the metal so they were close to four and they would have finished the game as winners.

Instead a clever pass from Luke Thomas opened the QPR defense and with Patson Daka just running with ultimate pace to reach the ball he was taken down by Seni Dieng the QPR goalkeeper. Kelechi Iheanacho scored from the penalty spot with a calm and good finish and secured a late equalizer for Leicester who then came away from this affair with a bit of satisfaction.

Clearly a step in the right direction but still a great number of questions to be answered and especially in the back Leicester do miss Jonny Evans heavily, hopefully he can play against Villareal and Man City as his presence is very much needed, but again what will Brendan Rodgers do regarding his system and how will he play, the switch from a three to a two men central defense is a bit of a worry as it is the most important part of a build up towards a new season.