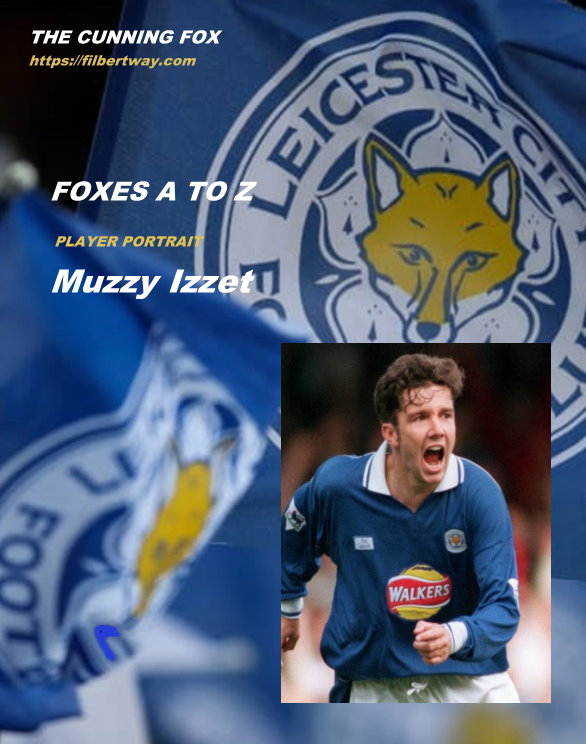 Unblooded by Chelsea, and utterly unknown elsewhere at the time Martin O’Neill made him a deadline day loanee, midfielder Muzzy Izzet took next to no time to make his mark as City’s promotion drive took off sleeply following the nadir of his debut day defeat (the infamous occasion when MON was almost prematurely booed out of his job!). Slutting in alongside Neil Lennon and demonstrating som neat close control and nifty right foot trickery. He earned an extension to his temporary deal, scored the headed goal at Wembley for the equalising penalty against Crystal Palace, and was then signed permanently for a fee of £800 000 (plus a sell-out clause), from then on he became genuine jewel in City’s proud critic confounding Premiership odyssey, matching a bubbly buzzing enthusiasm to maturing talent as a quick witted attack minded linkman, exhibiting occasional right-wing by line magic, and increasing the frequently of his spectacular scoring strikes.

Muzzy impressed in all three of the League Cup finals of the O’Neill era, uncomplainingly assumed front running duties in emergencies, took over penalty responsibilities in 1999, became the first City man to win the Carling Player of the Month award (Sep 99) and around that time scoring in five consecutive Premier League home games. In 1998 MON was vocal in his surprise that no England call-up had come Muzzy’s way, and the Londoner eventually tired of waiting for such a merited honor.

He had previously been courted by Turkey (on account of his Turkish Cypriot paternity), and had shown interest until learning he’d have to undergo military service to qualify, but whne that condition was removed, Muzzy took out Turkish citizenship in early 2000 and duly made his international debut against Sweden in the European Championship Finals.

The departure of Neil Lennon thrust extra responsibility on Muzzy during 2000/1, but he remained the source (and likely cutting edge) of much of City’s forward momentum until an injury suffered in the Wycombe FA Cup humiliation curtained his season. He was rarely quite the same inspiration for a while thereafter, and seemed frustrated by the violent dip in City’s fortunes during 2001/2; giving vent as the 100th City player dismissed in senior football when receiving marching orders at Bolton shortly after coming on from the bench.

A transfer request was no surprise, but Aston Villa boss John Gregory was denied the funds to buy him, and then Muzzy himself turned down Middlesbrough overtures after a £6m fee had been agreed. It was pretty much accepted, though, that he had already bidden his informal farewells to Leicester by the time he made a 20-minute sub’s appearance for Turkey in their 2002 World Cup semi-final defeat by Brazil. He also received the World Cup 2002 bronze medal, but was an unused sub in the game v. South Korea. It was something pleasant surprise finding him lining up for the opening Division 1 fixtures in the Walkers Stadium, even if City were desperate to raise cash on their playing asset. His class shone through much of the ensuring promotion term, which he capped with the indisputable goal of the season, a dazzling overhead kick at Grimsby, and ended with selection in the PFA’s divisional team of the season.

He was less consistent in the Premiership relegation campaign which ensued, but there were always suitors for his services in the wings, and he eventually linked up once again with Robbie Savage and Emile Heskey at St. Andrews and Birmingham City, when his contract expired. Sadly, though, his time with Birmingham was a matter of injury after injury, and Muzzy was forced to announce his retirement with a serious knee problem in June 2006, after a mere aggregate of 28 games and one Premiership goal in two years for the West Midland Blues. Some years later after a few appearances in small sided veterans football in a City shirt, he did contribute in Leicestershire Senior League fare to Thurmaston’s efforts.

Muzzy’s younger brother Kemal for some time fringed Charlton Athletic’s first team, then made his sustained League mark in Colchester United’s midfield, playing 422 league games in his years between 2001 and 2013.